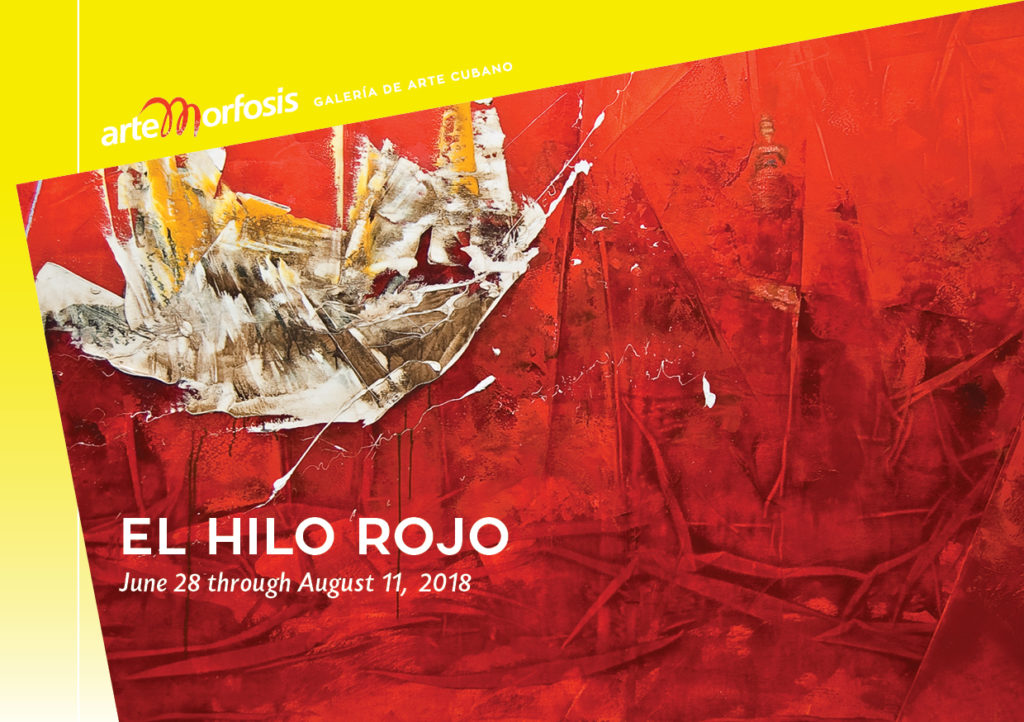 The works of this exhibition are all united by one common thread, the color red. Despite using different styles, each artist is united by the passionate language of red. The use of red can be traced throughout art history; artists have used red to convey passion, royalty, violence, sensuality, and contrast. Red is intense, elemental and dramatic. It can be lucky, protective or political. Its symbolic value is endless.

The title of this exhibition has both literal and symbolic meaning. It references the exhibition’s focus on works depicting the color ‘red’. The phrase also references an overarching idea; while these works are clearly connected by their color scheme, these connections go far deeper. Chinese legend refers to the ‘red thread of fate’, an invisible cord that binds those destined to meet one another, similar to soulmates. While these artists may not be soulmates, perhaps there is an element of destiny in the way the color red has continued to manifest itself throughout history. A look at the symbolic and emotional value of the color red shows how these artists are part of a local and universal ‘red thread’.

The political connotations of red may at first glance be the most obvious Cuban connection. Red is traditionally associated with communism; living in a communist country, Cuban artists could use red to represent their allegiance to this system. In Cuba, red also has protective properties. The color is often displayed at the entrance of a household in order to ward off negative thoughts and energy, keeping them outside the house. Similarly, Chinese culture has a strong connection to red, one that the artists in this exhibition are aware of. In China, red symbolizes good fortune, luck, and happiness, and is seen in abundance during Chinese holidays and gatherings. Like Cuba, China’s communist government adds another symbolic layer to red. Flora Fong and Gilberto Frómeta’s use of red is clearly influenced by the color’s significance in Chinese culture.

While red has clear ties to Cuba, the artists of this exhibition are also part of a larger art story. The symbolism of red goes beyond local cultures, becoming part of a universal understanding.

Red is the color of passion. Red’s history of passion goes back to one of humanity’s greatest dramas: the Passion of Christ. In Renaissance altarpieces and triptychs, artists like Matthias Grünewald would use red to symbolize Christ’s passion and the blood he shed for humankind. Artists in this exhibition and throughout history have taken advantage of red’s passionate connotations. Women are depicted in red tones and with red lips. It seems a portrait of a woman is not complete without some rouge on her lips. The rococo artist François Boucher’s Portrait of Mme de Pompadour at her Toilette (1758) certainly attests to that. Depicted applying make-up, Louis XV’s mistress is the embodiment of female beauty. The red she applies to her lips is symbolic of her seductive qualities. Eduardo Roca (‘Choco’), Lancelot Alonso and Carlos Quintana follow this tradition; their portraits of women all display red lips, a universal symbol of feminine charm.

Red is a color of challenge. When we ‘see red’ we are often challenged by its intensity and its boldness. Franz Marc, a German expressionist, was very interested in the symbolism of color. He saw red as brutal and heavy, a color to be opposed and overcome by other colors like blue and yellow. His work, Fighting Forms (1914), shows the challenge red poses in relation to the other colors and the dynamism with which it fights back. Red can be used as an effective contrast; its intensity often needs to be balanced out. Piet Mondrian used red with other colors to create a universal harmony of line and color. Similarly, artists in this exhibition like Zaida del Río and Osy Milian use red as an accent in their works to create balance. Red is used to draw attention to certain elements without overwhelming the entire composition.

Artists have used red’s challenging quality to convey political unrest. Andy Warhols’ Red Race Riot (1963) depicts the violence of the civil right movement in Birmingham, Alabama. The entire image is seen through a red wash, immediately creating an intense drama. Duvier del Dago, whose works are the most explicitly political, often used red as the only color in his works, indicative of red’s connotations of unrest.

Finally, red can challenge our vision of the natural world. Like expressionists and symbolists, many artists in this exhibition use red emotionally rather than realistically. Edvard Munch painted his sky an unnatural red in The Scream (1893), conveying the anxiety of the end of the century. Paul Gaugin uses a red background in The Vision of the Sermon (1888) to emphasize the dream-like quality of the vision. The Cuban artists Ernesto García Peña, Alicia Leal and Pedro Pablo Oliva all use red to a similar effect. They create a dream-like ‘unreality’, where red is more than just a color, it is a feeling.

Artists in this exhibition envision red in varying ways: as the dominant trait of a painting or as an accent to draw attention to a work’s focal point. They paint lustful lips, fiery hair and crimson skies. Each artist uses red to enhance the work’s story, recalling a passion that is both artistic and Cuban. While each artist is firmly influenced by their Cuban heritage, their dynamic use of this vibrant color is part of greater artistic narrative. They speak to an increasingly globalized world in the most universal of languages.

De Giorgi asks: ‘Imagine walking into the gallery and seeing only red; red works and red emotions. In red my eyes have seen love, tension and harmony. What do you see?’